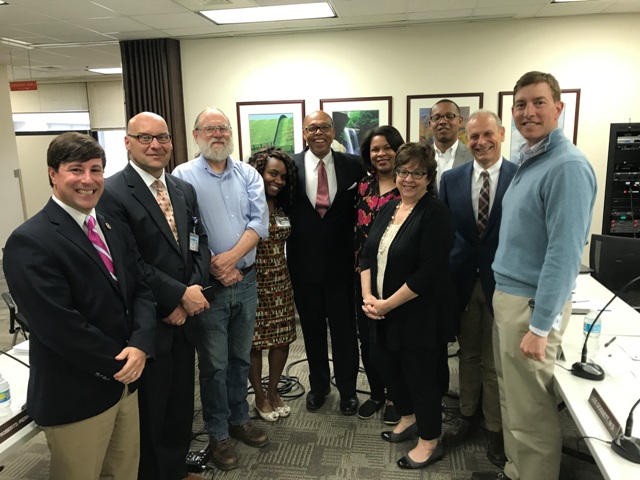 The Lexington-Fayette County Health Department’s Board of Health selected Kentucky State Sen. Reginald Thomas as the 2017 Dr. Rice C. Leach Public Health Hero. The award is given annually to individuals who have demonstrated their dedication to improving the health of Lexington residents. The winner is announced each April as part of National Public Health Week (April 3-9, 2017).

Thomas, who represents part of Fayette County in the state senate, is a public health advocate through his actions statewide, including co-sponsoring legislation to teach high school students CPR, supporting rights of breastfeeding mothers and protecting children and adults against abuse, neglect and exploitation. He has supported bills offering better services for autistic individuals, gaining rights for child care centers to administer epinephrine injections for allergic reactions and removing barriers to colorectal screenings.

Thomas has also worked closely with the Lexington-Fayette County Health Department for information to help shape statutes and regulations to improve the health and well-being of Kentuckians.

He is an active community member in Lexington, serving or having served on the boards of the Lexington Actors Guild, the Lexington Convention and Visitors Bureau, the Kentucky Conference of Community and Justice, Bluegrass Community and Technical College and Commerce Lexington. He is a graduate of Bryan Station High School, Dartmouth College and Harvard Law School. He and his late wife Lynda have three children and one granddaughter.

Thomas “is a selfless advocate of protecting and prospering the health and well-being for all members of Lexington and Fayette County,” states the award nomination. “He is a true champion for public health.”

Thomas will be recognized at the April 27 Lexington-Fayette Urban County Council meeting. He will also be honored at the May 8 Board of Health meeting held at 5:45 p.m. at the Lexington-Fayette County Health Department, 650 Newtown Pike.

Be sure to listen to our Healthy Times radio interview with Reggie Thomas to hear more from the 2017 Dr. Rice C. Leach Public Health Hero!